work effectively with the police, for the benefit of the young people in our schools.” 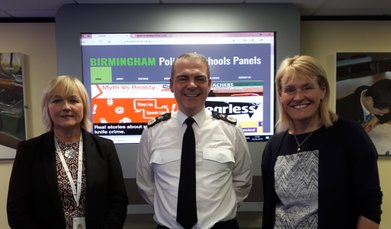 Effective joint working between schools, the police and key partners is widely recognised as an important partnership approach in reducing crime and anti-social behaviour involving young people, and promoting their safety and wellbeing.

Following the withdrawal of school based police officers from 17 secondary schools in Birmingham; a need was identified to review the relationship between police and secondary schools at both a local and strategic level.

In the context of the need by all partners to efficiently and effectively use staff resources, Police & Schools Panels were proposed in February 2011 as a realistic option for effective joint working between secondary schools, the police and key partners including Birmingham Youth Offending Service and the Behaviour Support Service.  The Panels offered an opportunity to develop relationships with all secondary educational establishments across Birmingham.

The overarching aim of the Panels is to ensure consistent engagement that is proportionate to the needs of both schools and the police and achieves the four strategic objectives of the West Midlands Police Children and Young Person Strategy, namely to:

Following a launch event in May 2011 at St Thomas Aquinas Catholic School, the Panel process was agreed by Head Teachers, Neighbourhood Policing Unit Superintendents and other senior partners as the way forward. By September 2011, 6 Police & Schools Panels had been formed in North, West & Central and South Birmingham.  By January 2012, 3 additional Panels had been formed in East Birmingham - providing citywide coverage.